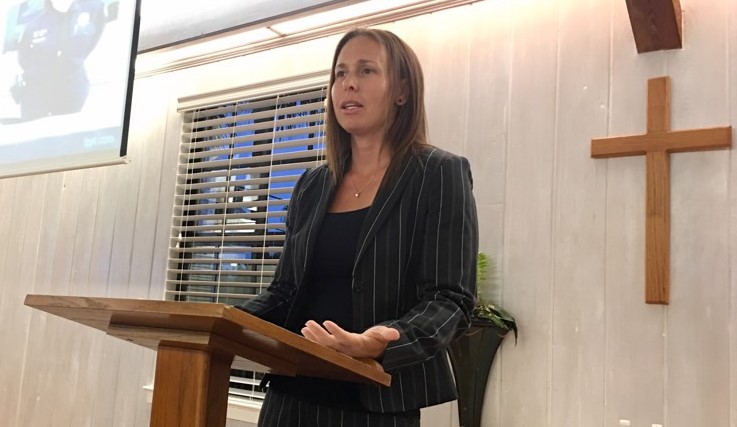 To the outside world, it’s strange. Lucas’ job for the past year has been to put unscrupulous sober home operators behind bars, which she’s done on more than a dozen occasions with the state attorney’s sober home task force. The task force has made more than 20 arrests since October.

But many of those arrests, Lucas said, wouldn’t have happened had she not bonded with members of the recovery community.

“(Those relationships) are vital,” Lucas said.

And on Wednesday, the South County Recovery Residence Association, a self-regulating coalition of more than a dozen local drug-treatment business operators, gathered at St. Paul’s to honor Lucas for her work.

“There’s so much greed involved in recovery,” said Jim Tichy, who owns The Lodge recovery houses in Delray Beach. “But there are lives involved here. And when you do things to exploit and hurt the kids, you’re not one of us.”

This local sober home collective has for 15 years been a network for operators to seek advice and tools from one another and band together to lobby for the best interests of the industry.

But more recently, it’s been a source of information for law enforcement seeking to rein in exploitative practices among a billion-dollar drug-treatment industry.

“We get our hands dirty,” said Tichy, recently named president of the association. “We work directly with Nicole. We’re the good guys.”

It’s become a mantra of the South County Recovery Residence Association — “Not all recovery residence operators are corrupt,” Tichy said.

Lucas understands that, and that she needed to gain the trust of the “good guys” to succeed in catching the bad ones.

Lucas started a Facebook page about a year ago, “a shot in the dark,” she called it, and added the biography: “If you were unhappy with your treatment facility (detox, halfway, IOP…) please contact me.”

“I was overwhelmed by the response,” she said.

She slowly dug through scores of messages from wronged residents struggling with addiction, some of whom are sources in her pending investigations. She formed relationships with certified recovery residence operators to gain insight into the industry. She focused on the apex operators who are accused of the worst practices, such as letting addicts relapse just to maximize profits.

“The most frustrating part is feeling like I can’t work fast enough,” Lucas said. “There are still homes that allow people to use drugs. … Lives are in jeopardy.”

All the while, the recovery industry at large has secured a label of corruption, to which Lucas is also sympathetic.

“If there’s a police officer out there that does something wrong, everyone blames the whole profession,” she said. “It’s like that with any group.”

Delray Beach Police Chief Jeff Goldman underscored the position when he made a speech at Wednesday’s ceremony.

“You are saving lives,” he told the crowd. “And just so you know, your police department gets it. We’re with you. We can’t stand the bad providers just like you.”